There are currently approximately 2900 active seagoing ROPAX (roll-on/roll-off passenger) ships and landing crafts according to the Global Integrated Shipping Information (GISIS) of the IMO and MarineTraffic. From these approximately 45% have European flag and operate in European waters, showing that Europe is currently one of the biggest markets. In most of the European countries an important share of the fleet is comprised by ships with a gross tonnage under 1000, as can be seen in Figure 1 below, totaling 42% of the ships under these categories. Norway, Greece, Italy and the United Kingdom comprise around 55% of the ships with European flags. 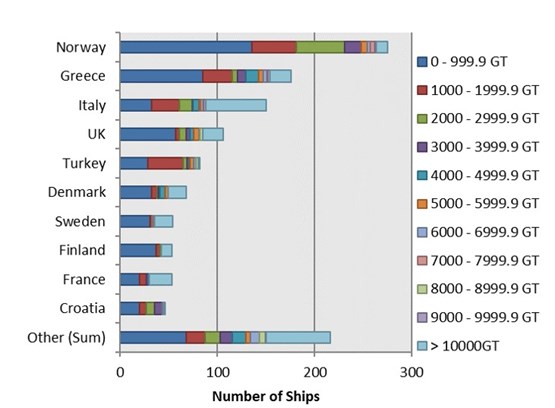 The number new builds of ROPAX ferries has also shown an increasing trend between 2014 and the current year, particularly punctuated by ships under European flags, while remaining relatively stable for ships with flags of the rest of the world. Figure 2 below additionally shows that world orders for 2019 amount 91 ships, presenting an increase of 21% in comparison to 2018. This increase is mainly related to an increase of 41% in the new builds with European flag, going from 31 ships in 2018 to 42 in 2019. The main influencer on this trend is Norway, since 22 ships are expected to be delivered or were already delivered this year. 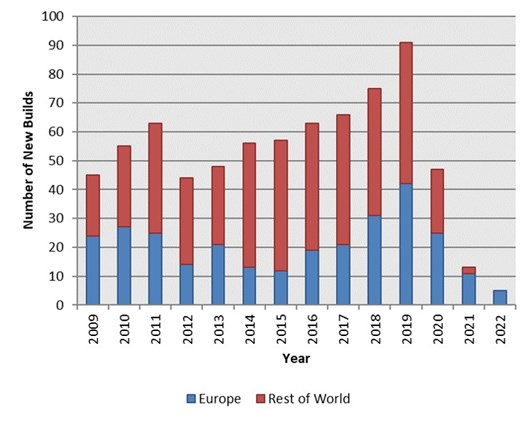 Figure 3 shows additionally that the segment of ships with a gross tonnage under 3000 represents an important share of the new builds with European flag in the last 10 years, totalling 71% in 2018. Data for 2021 and 2022 shows only ships with a gross tonnage above 10000, mainly because their construction may take several years, while smaller ships are included in shorter advance to the order book. 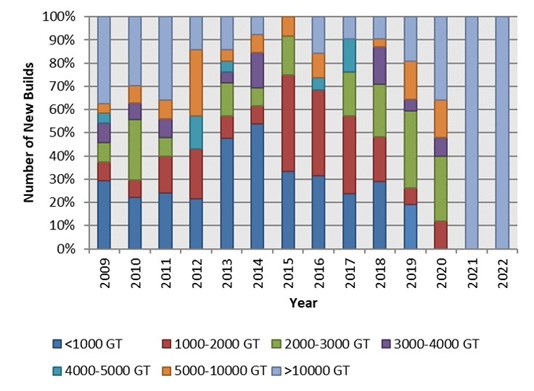 ROPAX ferries and landing crafts with European flag represent an important share of the global fleet, with an increase of new builds with European flag in the last years. Ships with a gross tonnage under 1000 in turn represent an important share of the European fleet and the new builds, and hence, the impact of bringing new technologies to minimize the emissions in this segment might have a considerable effect. Although the numbers presented here do not represent the final stage of the research conducted in the framework of project HySeas III, they allow an appraisal of the current situation. 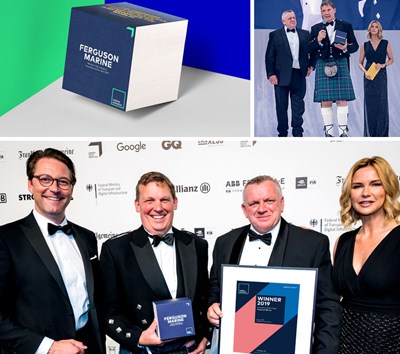 09 MAY 2019
A HAZID workshop for the Hyseas III project was held from 29 April to 2 May, covering batteries, fuel cells and hydrogen.
PROJECT UPDATES 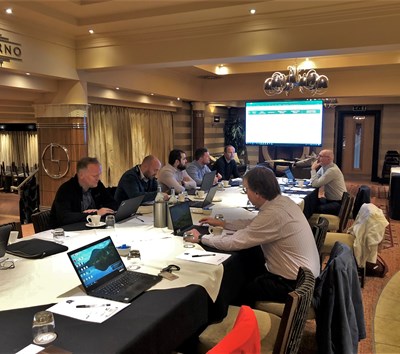